This is the 1st volume of the Suicide Squad Rebirth series. Tom Williams (Character Artist) and Rob Williams ( letterer) are joined by Dave Stewart and Howard Porter for the exciting and highly anticipated story of the team’s origins and subsequent encounters with the criminal

underworld. conceal the Black Vault and its mysterious contents, using the unlikely team of Suicide Squadmembers- 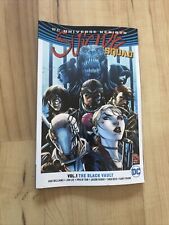