The Joker by Azzarello, Brian Review

The Joker is an upcoming book by Yann Martel, due out in 2019.

The Joker is an idyllic, if dark, snapshot of the last days of Gotham City.

The book tells the story of The Joker, a senile, insane caricature of a charming, yet dangerous, crime lord.

This is the story of the real-life triggerman behind the Christmas Day Suicide bombing, and the man who Walcott calls “the most eloquent and adept practitioner ofotide in the world.”

It is a Beware the Batman novel, but with a Suicide Squad twist.

Brian Walcott is a young, newly minted cop on the beat in Gotham City, fresh out of the academy and eager to prove himself.

One of the biggest cases of his career features Scarecrow, the Silence of the Lambs-inspired madman who killed ace detective Spoiler, and Walcott is determined to bring him to justice.

As they close in on the Clown Prince of Crime, Walcott must decide whether to take fearless risks or play it safe – a decision that will determine whether he ever gets the chance to perform at his best.

The Joker is an idyllic, if dark, snapshot of the last days of Gotham City. It is perfect for readers interested in Gotham City’s criminal underworld, as well as fans of Martel’s other work, such as Buccaneers, The Preacher and Book of the Dead. 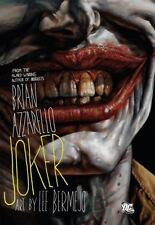