Before the terrorist attacks of September 11, 2001, the entire world was on edge. The Center for Disease Control and Prevention had just released a report that showed a threefold increase in terrorist attacks in the past year. America was on high alert and the public was gripped by fear.

Then came Chuck Dixon’s Under the Cowl, a classic graphic novel documenting the events leading up to and following the 9/11 attacks. Dixon’s writing is crisp and concise, and the characters are compelling. Moench, Johns, and Morrison DEADPOOL, POKEMON, X-MEN, INVINCIBLE, ASTONISHING AVENGERS, and more are all wonderfully created and well-realized. This book is a must-read for all fans of comics and its world. 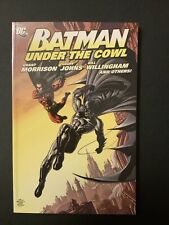